Have Questions? Get Answers Here 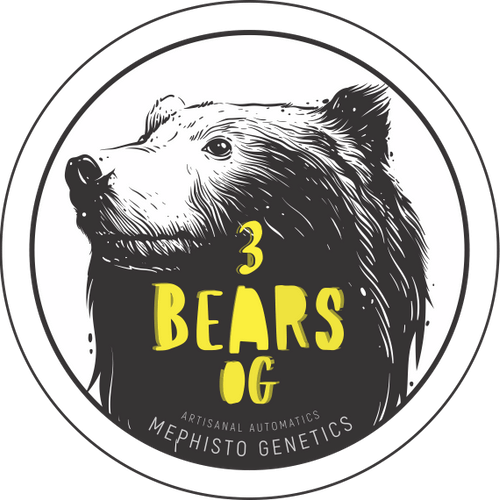 In 2013 whilst we were still setting up our farm, we were blessed with a visit from Karma, who being the experienced guru of growing and fine genetics, as well as being a stand-up guy, resulted in us being passed some of his personal selections to tinker with, along with a heap of good advice. One of which included the then labelled Karma’s OG, now named Bear OG. We know Karma put his heart and soul into the creation of his Bear OG, so we wanted to do it true justice in auto form and mirror that with our own work. Bear OG was very impressive as an OG, she wasn’t too finicky, or viney, she was adaptable, and very easy to grow, a single topping created a very even canopy of thick juicy nugs. We trialed her inside and out over several seasons, in non ideal conditions too and her quality always shone through. She had a great vigor, exploding when put in flower and responded extremely well to training, vegging beautifully and cloning well. Something that made her a mainstay crop with that headstash quality, so to put it simply, she ticked all of our boxes. Her flowers are hard as boulders and yielding greatly, even when mistreated, blew us away. We already have several projects involving various OG Kushes, but felt our Triangle was an ideal match and shared a lot of common traits to be paired with the Bear OG. We grew Bear OG from seed alongside Karma’s own selection, which we often do when starting a project to make sure we’ve really made the best choice and have the best candidates to work with. After all, it would be silly not to, as we know we’ll be investing at least a couple of years to bring a project to term. We found some gems in the seeds, but Karma’s personal cut took the cake. The F1 generation when grown out was very uniform, and remarkably similar to the photoperiod Bear’s we’d grown previously. Topping once pre putting them into 12/12 created a lovely even multi-topped bush with all the prized nuggets residing in the canopy. The majority showed nice colouration, and fully frosted nugs. The F2 threw out a number of phenotypes, but it was easy to spot the flower formation and aromas we loved so much from the F1s.S

3 Bears OG is without a doubt a cornerstone to our Artisanal collection; solid auto stock twice outcrossed to OG’s of impeccable qualities, we now have true OG quality flowers in automatic format. We’ve managed to blend the best of the fabled OG with a compact and controllable growth pattern. A mini-me OG. It becomes evident from early on that the 3 Bears OG just stacks and plumps up flowers like there’s no tomorrow. For a compact plant, the yields can be spectacular with no sacrifice in quality or speed. She’s a stocky build and will benefit from a little leaf tucking between days 20-30 to make lovely thick secondary colas. The inter-nodal gaps are just right, and it’s possible to easily end up with zero pop-corn on these girls. Aromas and frost take awhile to really kick in, being subtle at first but once engaged and into gear they take you on a journey to funky town, mouth watering watermelon with hints of powerful lemon OG funk. Yummy. She colors up very easily too, from Deep Purple to Black in the foliage and sugar leaves. Because of the thickness and density of colas it is well worth making sure that airflow is optimized during the last two weeks of the cycle.